In a quaint little English village in the Hampstead Heath the group would quietly gather each second Wednesday, sometimes meeting at the enclave -or in the boudoir. Dexter would lead the group and orchestrate poetical recitals and wine consumption. Wine would flow and conversation abound, such was the enthusiasm of their scholastic endeavours.

Yet after some time, a transmogrification occurred, Dexter began critiquing the writings of others within the group, especially after consuming too much Beaujolais. He was the cynicist of bohemian persuasion, arguably a societal misfit. He was a glorious disaster. He was jobless yet could act like a depraved intellectual with ease. The group was plagued by arguments, as a result of Dexter critiquing another writers work. He felt he had artistic licence to criticize anything and anyone. 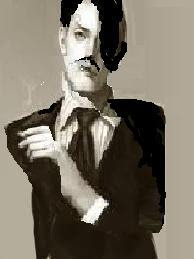 Overtime he became more belligerent the drunker he became. He acted like a lout and others had to restrain him. He evinced the most appalling conduct and degenerated in a total disgrace. He dressed like Oscar Wilde and resembled a dandy from the Victorian era, yet he was a bastard. He had a thin bourgeois French style moustache, a tweed jacket, and Brylcreem  greased -back hair. He had a gold plated cigarette holder bought in a second hand shop in gay Paree, and he would strike numerous sophisticated poses in door ways. In his intoxicated states he would bounce off the walls and doors of rooms still managing to clutch his glass of wine- which was a permanent fixture in his hand. He was riotous fiend. A self-confessed nihilist with no concern for ethics, he believed he had transcended them completely, and, at times, it appeared he had.

If someone in the group mentioned Nietzsche for instance, he would stare vexingly at them quoting the great immoralist thus:

“Hope in reality is the worst of all evils because it prolongs the torments of man”.

However, Dexter was more obsessed however in primal regression theory. He longed to escape his bourgeois fetters and devolve into a primate, living and acting purely from instinctual habit- in the absence of all intellectual moral philosophical interference. He envisaged himself as a savage living alone in the state of nature. A morally bankrupt beast striving for survival like any other beast in the forest.

At the last meeting before the English Christmas break the group deliberated that they would travel and meet at a secret location in the woods, somewhere near Devon. Dexter thought it to a be a fantastic concept. Immediately he procured a case of the finest wine form a 16th century cellar to accompany him.

The track was difficult to negotiate, nonetheless Dexter dexterously negotiated his way through the forest whilst precariously clutching his case of wine. He donned a white English dinner jacket with gold cuff links.

Upon their arrival at the secret location the group began to recite their pieces. Dexter recited his work and steadily drank his wine, inevitably spilling some on his page. Then articulating in an aristocratic dialectic he proclaimed: “Kant's categorical imperative is a load of bollocks”. Suddenly a fight ensued and Dexter found himself on the ground, jacket torn, and sadly wine spilt. There was a lot of yelling and confusion. Dexter sprinted far into the woods with another group member in pursuit.

Eventually, he rested on a rock beside a creek. Yet upon rising to his feet he felt disoriented, where was he exactly? He was partially intoxicated, alone, and every part of the forest looked identical. In the distance he could hear dogs barking. Twas then that the realization struck him: was what he was hearing an English fox hunt in the distance, no, it could not be possible or could it? He scrambled cut and bruised through the naked brier as if possessed by some demonic force. The sound of the barking dogs grew louder until it became insufferable. Suddenly, a huge pack of ferocious foxhounds confronted him directly.

At this point he decided it was fight or flight. He stood, slowly turned around, and then with complete animosity on his face he gave the dogs a look of utter defiance and at the top of his voice screamed: “I AM MAN BECOME ANIMAL!” The words echoed through the forest and the surrounding hillside. Then with every single element of bodily energy he could muster he threw him self at the dogs. Twas at this very moment that he transcended all worldly metaphysical limitations, indeed, he had achieved his goal.