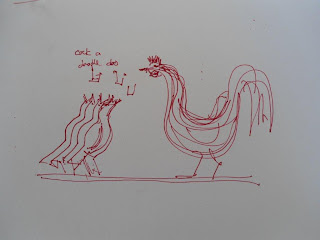 Bertie the Rooster
By Jan Cole

Bertie woke up early one Sunday morning as he always did. It was his job to call the animals together for their worship under the old oak tree. They had been doing this on the farm for as long as he could remember. He had inherited this important task from his father Hercules and undertook it proudly each week. On the other days, the under-roosters woke the farmyard for work.

As I was saying, Bertie woke up on this particular Sunday, threw his head back in preparation for his usual melodic ‘cock a doodle doo’ when all that came out was a pathetic ‘du’. He shook his head and started once again, the same thing happened, ‘du’. This was terrible, what was going on? Every day since his voice had broken he had fulfilled this duty without fail. Now no one would know that it was time to get up.

Bertie perched in his usual place on top of the hen house and glanced towards the old oak tree to see if Torquar the gander was yet ready in his fine white feather robes, in the shade of the tree. He was feeling quite desperate when he suddenly had an idea. If he could bribe his fellow competitors, the crows, to help him he just may get away with not letting the rest of the animals down. The crows were also early risers but had only one boring note each with which to greet the morn.

He managed to persuade four of his feathered friends to line up beside him on the hen house roof. He had carefully chosen birds with different call-notes. Dotty was the first with a low tone which would have to imitate the ‘cock’ then a short ‘a’ from a little baby crow call Ala, the doodle and do followed with the mellow contralto sounds of Dotty’s aunt and her sister. Now all Bertie had to do was position himself in front of his impromptu choir and conduct them with as much aplomb as he could muster.

Off they went, a bit wonky at first but once they had mastered the rhythm, the effect was amazingly similar to Bertie at his best.

The animals began to appear at the doors of their pens and proceed respectfully to the oak tree where Torquar was waiting in his coat of feathers. At first, no one even noticed that the four crows had cleverly fabricated Bertie’s call.

When they did, they laughed aloud and voted that ―from this day on ― the Roosters’ rallying call would always be known as a ‘Crow!


Posted by Diamond Harbour Writers at 19:54