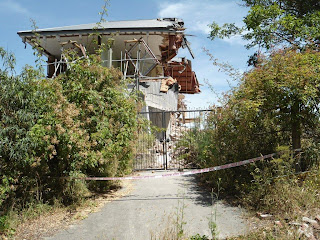 There’s a space where Godley House was
A void in the air around
No more coffees on the lawn, or singing
Nothing ― just a space, only memories, not a sound

There’s an empty cube above the plan or footprint
A ghost-house still exists there I’ll be bound
But the place where Godley House stood in its garden
Is empty, lost – not yet found

When at last the site is cleared, we’ll regain the vision
We’ll see new options spring from out her sad demise
A heart, a centre for this seaside village
Sustainable and vibrant will it rise
For now, we pay homage to the old house
To a lady from another century, old and brave
She stood guard for many years upon her viewpoint
But the Earthquakes won― from their wrath impossible to save

Yet, here in this wondrous tranquil gulley
A memory-garden has been grown from out the grass
Its paths and archways, seats and resting spots
Creating space to contemplate what came to pass 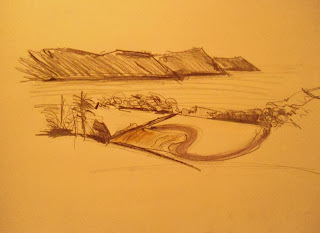 Whilst all around
The summer-bees buzz
Me near to sleep

Unloading ships from o’er the world
And
Loading them again 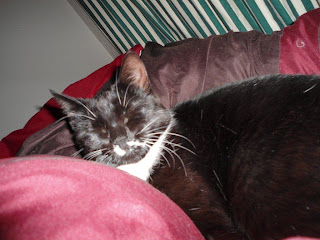 Each time I look at her
I’m filled with wonder,

A kitten from the wild
No human contact,
No loving touch or
Play
No friends

Merely, meagre, cold survival
On her own.

However,
Despite
Terror of enormous two foots
Looming large above her,
She braves our house
But will not let us touch her
Each move we make: slow, considered,
Trying not to scare her

Yet,
Today
She lies here on my bed
Curled in blissful warm inclusiveness
I celebrate her presence
Daily
Acknowledging her braveness,
Her fear
Of humankind

I am the lucky one.
I have her gift of
Quiet trust and love

Written for my little earthquake cat who appeared in the garden when only a few weeks old. It took about three months to gain her trust. 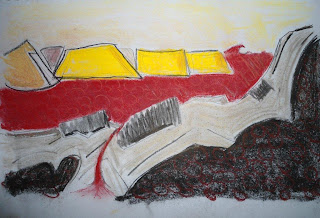 The headland, craggy and imposing, believed himself anchored firmly to the bedrock of the land of which he was part. He had sat on the north side of the harbour quietly for many a long year contemplating the view from his cliffs: to the West, the pancake plains flanked by his larger cousins, the Alps, and to the East the never-ending ocean, its sparkling expanse stretching all the way to the Americas.

He knew that he was but a remnant of a huge caldera, which had reached 3 times the height of our present Peninsula hills, a small part of a proud symmetrical peak, which eons ago had spewed forth its smouldering innards whenever the Earth-Gods squabbled beneath its feet. He had since then, however remained peacefully and proudly in his place guarding the harbour from the restless seas beyond. Over the centuries, he had watched the great Waimakariri River change its course and change it once again, as it made its braided journey from the mountains to the coast. The Maori people had called him Kotokitoki, meaning ‘very calm’.

The trouble began when the Earth-Gods started arguing again. They had lived in harmony for so many years but one day the Northern Cousins had wanted to move further south and so the row began. There was such a rumbling far below, a pushing and a shoving, that Koto eventually let out a huge roar ― torn apart by the force of the argument his cliffs shattered, falling down, down, down into the sea below.

He felt terrible. He knew that some people now lived on his outer slopes and many walked on his beautiful cliff tracks, and that they would be thrown into panic by his heaving and shaking. He knew also that his boulders would topple and roll, crushing any in their path; but he could do nothing about it. He was, after all, not a hugely important mountain, in fact, was merely a hill or headland in the eyes of the City and its people. This annoyed his mother Horomaka, greatly!

He remained in his spot shaking every now and then. His profile altered he no longer felt like himself, his Spirit still intact but his shape, shifted, making him uncertain of his new identity.

In fact, he was depressed. He needed to do something to lift him from this state, this state of flux and uncertainty in his core. He looked up and spied a fluffy cloud floating above him in the great expanse of mocking azure sky. All elements there as normal, sun in its place, clouds zipping happily about ignorant of the turmoil below. Then an idea came to him. The clouds could see into the distance, they were born to move about, unlike him. Perhaps he could get a message to them. A message telling how much, in his newly altered condition; it would help him find his sense of self if he were to be known again by his wonderful Maori name ‘Kotokitoki.’

Whilst pondering these matters, he noticed, trapped amongst his newly fallen rocks, a red balloon. If only he could attract its attention maybe it would float up to the clouds and pass his message on. He experimented with a gentle rumble but the balloon did not understand so he did a few sharp jolts, which translated successfully into Morse code that the balloon living near the Port was able to decipher. Now, he must dislodge his messenger to its freedom in the skies. At that moment, the Earth-Gods had an enormous fight resulting in even more shaking freeing Scarlet (for that was her name) in the upheaval.

Up, up into the sky she went, catching the updrafts until she came to rest on a friendly passing cloud. The cloud had heard of the mayhem beneath her. She was worried about her friends below and was glad to be able to help in any way she could. The first thing she could do was to guarantee the sunshine so that the struggling people would not be cold and wet whilst clearing up their devastated city, the next was to reassure the Little Mountain, Koto, that he would be OK. That in the future, people would accept his new shape and that he still had a very important role holding in the harbour-waters from the great Pacific breakers. The cloud, Lenticula, would send a message back to earth via Scarlet, suggesting that The Christchurch City Council change the mountain’s name from Godley Head, to its original name, Kotokitoki. This was to be in acknowledgement of his part in keeping the harbour calm after the earthquakes therefore allowing the continued passage of ships on their way to the Port of Lyttelton.

A few days later, the Press reported that The Council had received a message in the strangest of ways. A little boy had wandered into an emergency centre clutching a red balloon closely to his chest. It had floated right into his hand supported by a silver wisp of cloud and whispered to him, in a language only children understand, that he was to take it to the Mayor of the city. There mirrored on its shiny surface was the message from the cloud.

‘Dear People of Christchurch,
My name is Lenticula. I have been floating over your city watching your struggle over these last hard days. I know many of you are distressed but let us not forget the trauma of the land itself. I have been told of a particular little mountain who is afraid he let you down with all his shaking and rolling. In fact, he made a huge effort, during this time, to hold in the waters of the harbour despite the Earth Gods furore. You call him Godley Head but he is unhappy about this name. I therefore beg you to reinstate his Maori name “Kotokitoki”, meaning ‘very calm’, in recognition of his efforts to keep his harbour safe’ Love the Cloud.

And so, the people voted to change his name immediately, in a ceremony to be held on his craggy slopes.

When he heard this, Koto sighed a gentle sigh and the earth quivered; he understood that although his looks were changed his role had been recognized and his people did not blame him for his shakes and jolts.

Today, if you look up the Harbour you can see him proudly guarding its edge.
And, if you listen very carefully, you can hear the waves talking about him with new respect whilst they lazily wash up and down upon his tide-line rocks.
But best of all; Kotokitoki is at peace with himself again.

Posted by Diamond Harbour Writers at 14:38