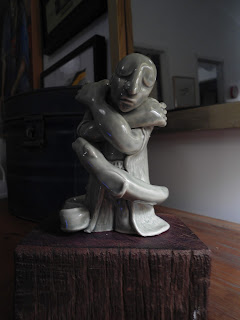 In the time of the slow-dream, many a long year ago, The Lake lay quiet in her bed on the edge of the Southern Seas: only separated from these wild ocean stretches by a long strip of water-smoothed pebbles. This spit, a hiatus between the roughest waters known to man and the placid food-filled bowl of ‘The Lake’.

At this time, in this tranquil place you might see water-elementals trawling the lake for food: these were people from before the before: before race and nationality divided our world; when the land and the people were virtually one: when there was no sense of other. They worked here in the hard, cold Southern winters and the hot lakefly-ridden summers, the season, which, would in the long-ahead future, be known as Christmastide.

Lake-waders, for that is what they were called, plied their trade across the wide-open expanse of the water, focussing only on the job in hand: to find food for the coming days. Water birds took off and landed all around them but without the aid of gunfire or arrow-fly, they were difficult to bag. Therefore, the inhabitants turned their attention to the mystical eel, which lived in the lake depths, lurking in the volcanic muds and a great source of nourishment for the hungry people. They took all they could find and fear reigned in the murky reed-filled depths.

This was the rhythm of those long-ago lives, accepted by most of the people as the only way but, there was in this lakeside group a being not wholly comfortable with the wholesale taking of the eel.

Elvo pushed slowly through the sky-reflected waters, separated from his companions by the length of a haunting birdcall; the beauty of his surroundings transporting him to another place. A huge volcano loomed high, close to the eastern shore and Spectacular Mountains cut the vast horizons on the west. All this did he wonder at.

Elvo, revered in his village, was acknowledged as a kind man; he struggled with the indiscriminate catching of the eels. His problem was that he had a way with eel, a relationship of creature-to-creature. When he walked in the lake, they came to him, wrapping their long bodies around him and sharing with him the secrets of the deep: secrets of their spawning thousands of miles away, in the warm waters of the Coral Sea, which would host not only their act of procreation but also their death.

Thus had it been for all eternity. They whispered how important it was that many of their kind be spared so they might return to their spawning-grounds in order that their species continue far into the future, giving life to the waters and providing food for the people: A balance.

Elvo listened to these murmurings and encouraged his companions to respect the creatures, which offered up their lives that they might live. He became closer and closer to them and could often be seen standing, motionless in the centre of the lake, arms crossed over his chest, a faraway smile on his face. All around him, eels curled and wheeled, their sharp teeth shielded whilst communing with this compassionate man: their friend.

Kind-Elvo expanded his calling by testing the lakeside plants for eating to supplement the diet of the hungry people existing on the hinterland that they might not need to take so many of the eel folk. Tales of his beneficence spread: some even believing that to be in his presence was to receive grace and kindness, and to enjoy always the richness of the earth and bounty of the seas in this beautiful land of the beyond.
His greatest gift though, was to teach his fellows the art of moderation: that there always be more.

And so, thanks to the miracle of time-shifting transportation and the magical skills of Blanche, we have been given the opportunity to once again enjoy the qualities of Elvo, to appreciate what he represents, and to be reminded of how his philosophies are even more relevant now than in those far off mythical days.